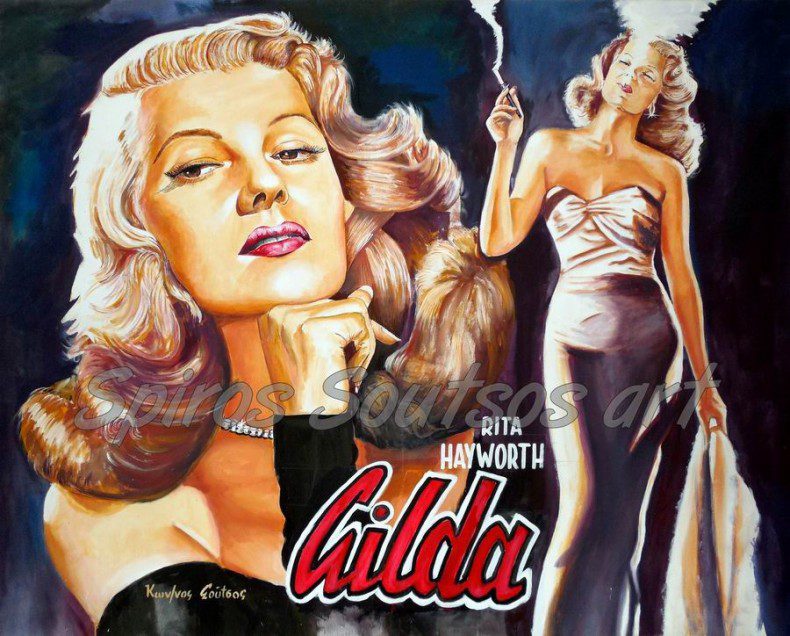 If you are interested in purhasing an Art Print for this original piece of art, please click on the button below :

Gilda (1946) classic film-noir: about the movie

Gilda is a 1946 American black-and-white film noir directed by Charles Vidor and starring Rita Hayworth in her signature role as the ultimate femme fatale and Glenn Ford as a young thug. The film was noted for cinematographer Rudolph Mate‘s excellent photography, costume designer Jean Louis’ wardrobe for Hayworth (particularly for the dance numbers), and choreographer Jack Cole’s staging of “Put the Blame on Mame” and “Amado Mio“, sung by Anita Ellis. In 2013, the film was selected for preservation in the United States National Film Registry by the Library of Congress as being “culturally, historically, or aesthetically significant”.

Gilda was originally designed as a noir crime film (Humphrey Bogart turned down the role of Johnny Farrell), but it was also a film specifically intended as a vehicle for Hayworth, Columbia Pictures’ principal female star. She was a talented dancer . Astaire apparently claimed she was his favourite co-performer as she was his dance partner in You’ll Never Get Rich (1941) and You Were Never Lovelier (1942). Studio boss Sam Cohn and producer Virginia Van Upp realised that Gilda would have to include scenes of Hayworth dancing and singing. The song ‘Put the Blame on Mame’ was written specifically for her by Doris Fisher and Alan Roberts. The scene, in which Hayworth wore black satin and performed the legendary one-glove striptease, singing “Put the Blame on Mame”, made her into a cultural icon as a femme fatale and sex symbol of 1940’s.

While Gilda was in release, it was widely reported that an atomic bomb to be tested at Bikini Atoll in the Pacific Ocean’s Marshall Islands would bear an image of Hayworth, a reference to her bombshell status. The fourth atomic bomb ever to be detonated was decorated with a photograph of Hayworth cut from the June 1946 issue of Esquire magazine. Above it was stenciled the device’s nickname, “Gilda”, in two-inch black letters.  Although the gesture was undoubtedly meant as a compliment, Hayworth was deeply offended. Orson Welles, then married to Hayworth, recalled her anger in an interview with biographer Barbara Leaming: “Rita used to fly into terrible rages all the time but the angriest was when she found out that they’d put her on the atom bomb. Rita almost went insane, she was so angry. … She wanted to go to Washington to hold a press conference, but Harry Cohn wouldn’t let her because it would be unpatriotic.”