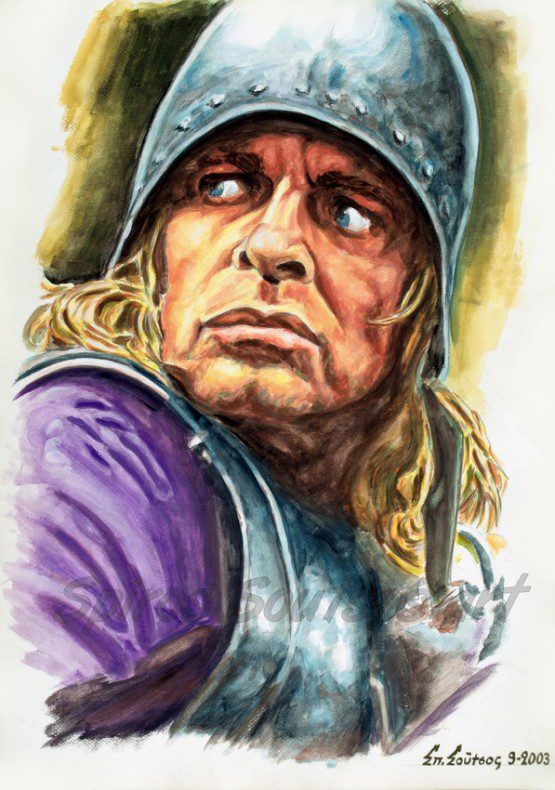 Posted on at by admin / Epic-Adventure, Movie Star-portraits, Spiros Soutsos / 0

Klaus Kinski (born 18 October 1926 – 23 November 1991) was a German actor. He appeared in more than 130 films. He was considered a controversial figure in Germany, as his emotional volatility was notorious, as were rumors of his numerous affairs with women. His three daughters Pola, Nastassja, and Nikolai Kinski, are all of them actors.

During the 1960s/70s, he appeared in various European exploitation film genres, as well as more acclaimed works such as David Lean’s Doctor Zhivago (1965), wherein he featured in a supporting role as an anarchist prisoner on his way to the Gulag. He relocated to Italy during the late 1960s, and had roles in numerous spaghetti westerns, including Sergio Leone’s For a Few Dollars More (1965) , A Bullet for the General (1966), The Great Silence (1968) with Jean-Louis Trintignant, and A Genius, Two Partners and a Dupe (1975). He turned down a role in Raiders of the Lost Ark, describing the script as “moronically shitty”. In 1977 he starred as the guerrillero Wilfried Böse in Operation Thunderbolt, based on the events of the 1976 Operation Entebbe.

In 1970’s, Kinski began to work with German director Werner Herzog. Eventually, their collaboration brought him international recognition. They made five films together: Aguirre: The Wrath of God (1972), Woyzeck (1978), Nosferatu the Vampyre(1979), Fitzcarraldo (1982), and Cobra Verde (1987). In their first film “Aguirre, der Zorn Gottes” the story follows the travels of Spanish soldier Lope de Aguirre, who leads a group of conquistadores down the Orinoco and Amazon River in South America in search of the legendary city of gold, El Dorado.The director and the actor had differing views as to how the role should be played, and they clashed throughout filming; Kinski’s tantrums terrorized both the crew and the local natives who were assisting the production. Shooting was entirely on location, and was fraught with difficulties. Filming took place in the Peruvian rainforest on the Amazon River during an arduous five-week period, shooting on tributaries of the Ucayali region. The cast and crew climbed mountains, cut through heavy vines to open routes to the various jungle locations, and rode treacherous river rapids on rafts built by natives. Some of Kinski’s violent outbursts on set were filmed in Herzog’s documentary My Best Fiend.