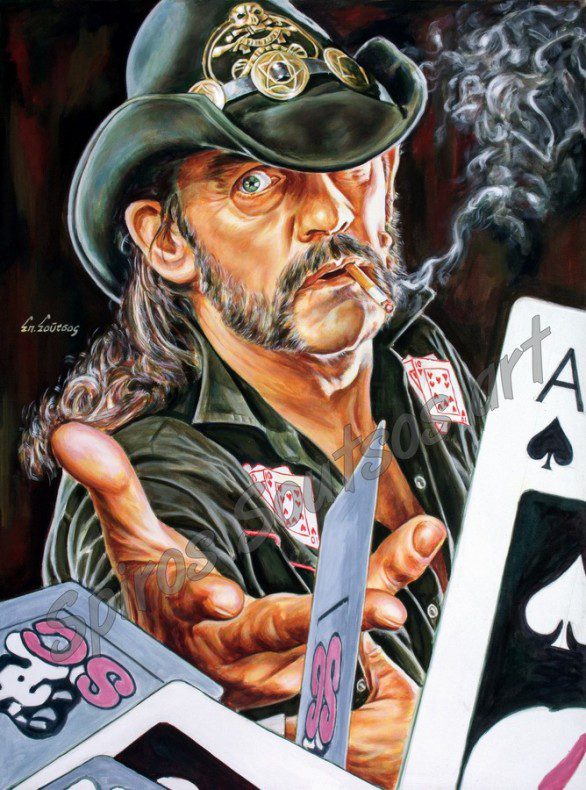 Ian Fraser Kilmister (24 December 1945 – 28 December 2015), known as Lemmy, was an English musician, singer and songwriter who founded and fronted the classic hard rock band Motörhead. His music was one of the foundations of the heavy metal genre. He was known for his appearance, his distinctive gravelly voice and distinctive bass playing style. He also had many minor roles in film and television.

Lemmy was born in Stoke-on-Trent and grew up in North Wales. He was influenced by rock and roll and the early Beatles, which led to him playing in several rock groups in the 1960s, including the Rockin’ Vickers. He worked as a roadie for Jimi Hendrix and the Nice, before joining in 1971, the space rock band Hawkwind and singing on their hit “Silver Machine“.

After being fired from Hawkwind, Lemmy formed a new band called “Bastard” with guitarist Larry Wallis (former member of the Pink Fairies, Steve Took’s Shagrat and UFO) and drummer Lucas Fox. When his manager informed him that a band by the name of “Bastard” would never get a slot on “Top of the Pops, Lemmy changed the band’s name to “Motörhead” – the title of the last song he had written for Hawkwind.

Soon after, both Wallis and Fox were replaced with guitarist “Fast” Eddie Clarke and drummer Phil “Philthy Animal” Taylor and with this line-up the band began to achieve success. Lemmy’s guttural vocals were unique in rock at that time, and were copied during the time when punk rock became popular. The band’s sound appealed to Lemmy’s original fans and, eventually, to fans of punk. Lemmy asserted that he generally felt more kinship with punks than with metalheads; he even played with the Damned for a handful of gigs when they had no regular bassist. The band’s success peaked in 1980 and 1981 with several UK chart hits, including the single “Ace of Spades“, which remained a crowd favourite throughout the band’s career. Motörhead released 23 studio albums, 10 live recordings, 12 compilation albums, and five EPs over a career spanning 40 years. The albums Overkill (1979), Bomber (1979), Ace of Spades (1980), Iron Fist (1982), Another Perfect Day (1983) and the UK No. 1 live album No Sleep ’til Hammersmith (1981), cemented Motörhead’s reputation as a top-tier rock band. They have sold more than 30 million albums worldwide.

Usually a power trio, Motörhead became one of the most influential bands in heavy metal. Although Lemmy has been credited with being part of various musical scenes, thrash metal or speed metal in the main, from the mid 70s onward, he has stated very clearly over the years, when asked the question, that he plays Rock n Roll, and has more of an affiliation with Punk Rockers than with the so-called Heavy Metal scene.

Lemmy continued to record and tour regularly with Motörhead until his death in December 2015 in Los Angeles, where he had lived from 1990.

Aside from his musical activities, Lemmy was well known for his hard-living lifestyle and regular consumption of alcohol and amphetamines. He was also noted for his collection of Nazi memorabilia and use of Nazi symbolism, although he clarified that he did not support Nazi ideals and was a libertarian or anarchist.