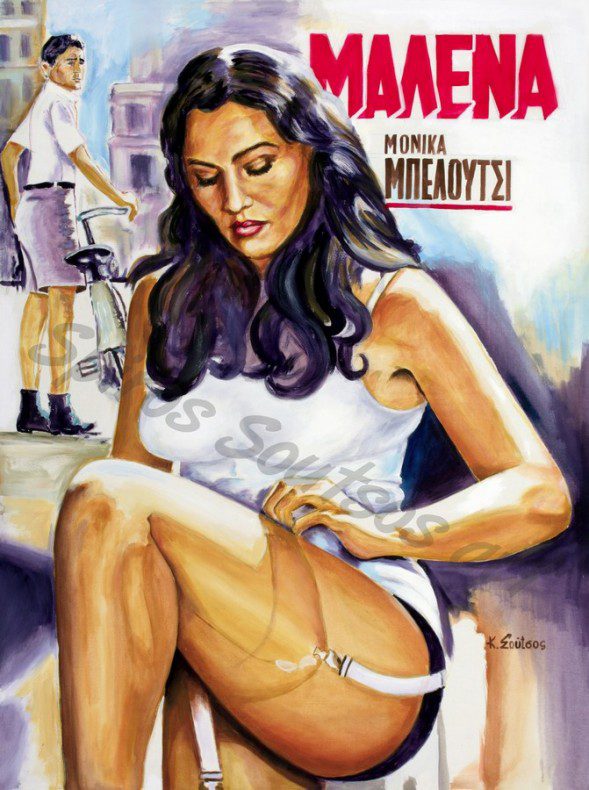 If you are interested in purchasing an Art Print of this artwork, just click on the button below:

Malèna (2000),is an Italian romantic drama film starring Monica Bellucci and Giuseppe Sulfaro. It was directed and written by Giuseppe Tornatore from a story by Luciano Vincenzoni.

The story of the film takes place in Sicily in 1940 during World War II just as Italy enters the war. A 12-year-old boy, Renato experiences three major events in one day: First, Italy goes to war; second, he gets a new bike; and third, he first sees the beautiful lady, Malena. Malena’s husband, Nino Scordia, has been taken away to fight in Africa and Malena is left alone with her father, an elderly and almost-deaf man. Malena tries to cope with her loneliness, as the town she has moved to tries to deal with this beautiful woman who gets the attention of all the local men, including Renato. However, in spite of the gossip, she continues to be faithful to her husband. Renato becomes obsessed with Malena and starts fantasizing about her. His fantasies become increasingly elaborate and he becomes obsessed with the young woman, peeping in her window often as she waits sadly for her beloved husband to return.

When first released, Variety wrote: “Considerably scaled down in scope and size from his English-language existential epic, The Legend of 1900, Giuseppe Tornatore’s Malena is a beautifully crafted but slight period drama that chronicles a 13-year-old boy’s obsession with a small-town siren in World War II Sicily. Combining a coming-of-age story with the sad odyssey of a woman punished for her beauty, the film ultimately has too little depth, subtlety, thematic consequence or contemporary relevance to make it a strong contender for arthouse crossover. But its erotic elements and nostalgic evocation of the same vanished Italy that made international hits of Cinema Paradiso and Il Postino could supply commercial leverage.

Film critic Roger Ebert compared the film to Federico Fellini‘s work, writing: “Fellini’s films often involve adolescents inflamed by women who embody their carnal desires (such as Amarcord and 8½). But Fellini sees the humor that underlies sexual obsession, except (usually but not always) in the eyes of the participants. Malenais a simpler story, in which a young man grows up transfixed by a woman and essentially marries himself to the idea of her. It doesn’t help that the movie’s action grows steadily gloomier, leading to a public humiliation that seems wildly out of scale with what has gone before and to an ending that is intended to move us much more deeply, alas, than it can.