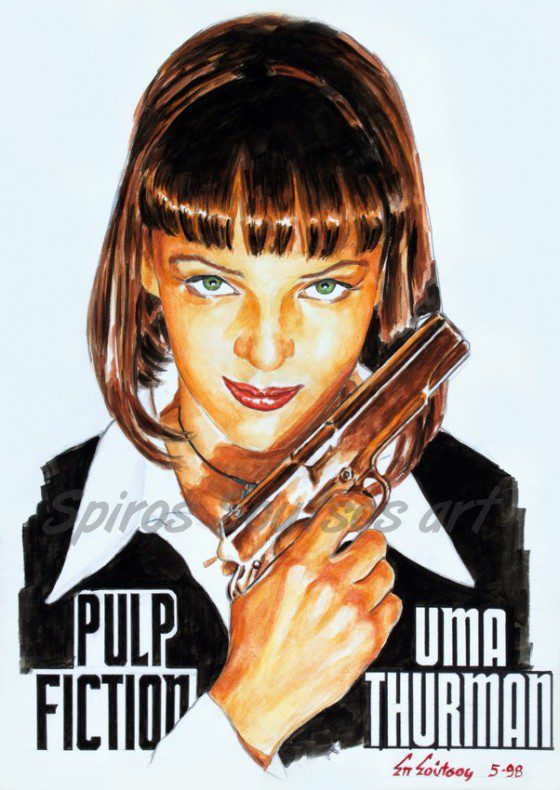 Pulp Fiction is a 1994 American black comedy crime film written and directed by Quentin Tarantino, from a story by Tarantino and Roger Avary. Tarantino’s second feature film, is a Cult movie and a major critical and commercial success. It is iconic for its eclectic dialogue, ironic mix of humor and violence, nonlinear storyline, and a host of cinematic allusions and pop culture references. The film was nominated for 7 Oscars, including Best Picture; Tarantino and Avary won for Best Original Screenplay. It was also awarded the Palme d’Or at the 1994 Cannes Film Festival. The film revitalized the career of its leading man, John Travolta, who received an Academy Award nomination, as did co-stars Samuel L. Jackson, Uma Thurman and Bruce Willis.

Directed in a highly stylized manner by Tarantino, Pulp Fiction connects the intersecting storylines of Los Angeles mobsters, fringe players, small-time criminals, and a mysterious briefcase. Considerable screen time is devoted to monologues and casual conversations that reveal the characters’ senses of humor and perspectives on life. The film’s title refers to the pulp magazines and hardboiled crime novels popular during the mid-20th century, known for their graphic violence and punchy dialogue.

The picture’s self-reflexivity and unconventional structure led critics to describe it as a prime example of postmodern film. The film has also been labeled as a black comedy and a “neo-noir”. Pulp Fiction is viewed as the inspiration for many later movies that adopted various elements of its style. The nature of its development, marketing, and distribution – and its consequent profitability – had a sweeping effect on the field of independent cinema. It is considered by many critics to be one of the best-written films of all time.

Against its budget of $8.5 million and about $10 million in marketing costs, Pulp Fiction wound up grossing $107.93 million at the U.S. box office, making it the first “indie” film to surpass $100 million. Worldwide, it took in nearly $213 million.

No film score was composed for Pulp Fiction. Dick Dale’s rendition of “Misirlou” plays during the opening credits. Tarantino chose surf music as the basic musical style for the film. The soundtrack album, Music from the Motion Picture Pulp Fiction, was released along with the film in 1994. The album peaked on the Billboard 200 chart at number 21.The single, Urge Overkill’s cover of the Neil Diamond song “Girl, You’ll Be a Woman Soon”, reached number 59.