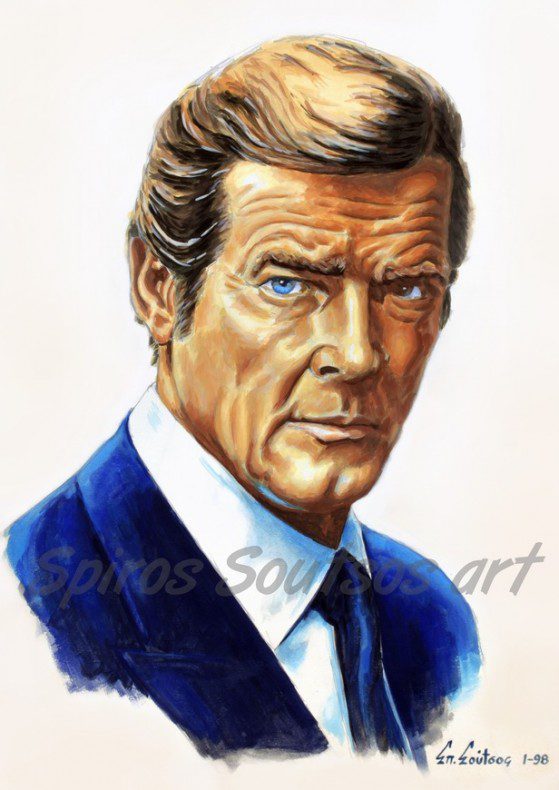 Sir Roger George Moore (born 14 October 1927) is an English actor, and played the British secret agent James Bond in seven feature films between 1973 and 1985. He worked as a model and made several appearances in minor films and television dramas before finding more substantial roles in the television serials Ivanhoe (1958–1959), The Alaskans (1960–1961) and Maverick (1961). Moore’s most significant television work came with his portrayal of Simon Templar in The Saint from 1962 to 1969 and his starring alongside Tony Curtis in the television drama The Persuaders! (1971).

Moore’s Bond was very different from the version created by Ian Fleming. Screenwriters like George MacDonald Fraser provided scenarios in which Moore was cast as a seasoned, debonair playboy who would always have a trick or gadget in stock when he needed it. This was designed to serve the contemporary taste of the 1970s. Moore’s version of Bond was also known for his sense of humour and witty one liners, but also a skilled detective with a cunning mind

Moore worked regularly throughout his Bond era, and has worked sporadically since. He is a Goodwill Ambassadorfor the charity organization UNICEF, and has demonstrated against the production of foie gras. Moore has been a tax exile from the United Kingdom since the 1970s. Moore has been married four times, including to the Welsh singer Dorothy Squires and the Italian actress Luisa Mattioli, with whom he had three children. Moore published an autobiography in 2008, and has written other books of reminiscences of his career and filming Bond.