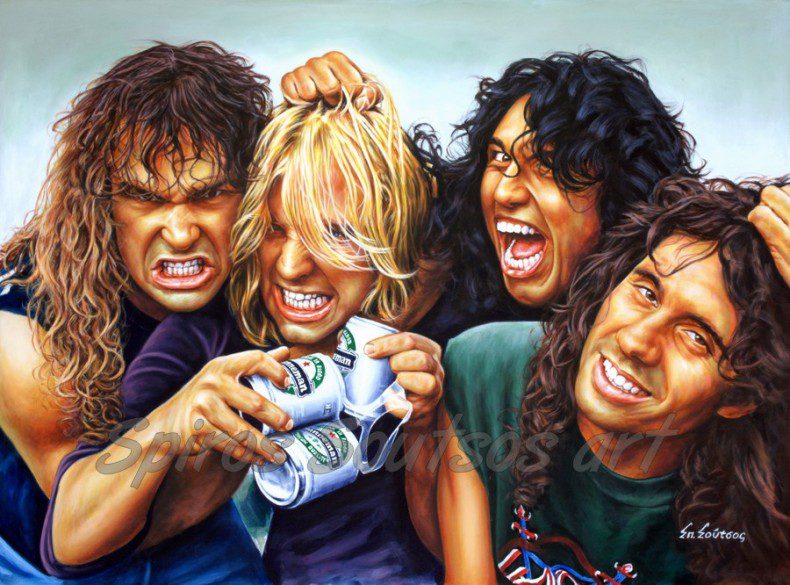 Slayer “Reign In Blood”painting poster; the making of

Slayer is an American thrash metal band from Huntington Park, California, formed in 1981 by guitarists Jeff Hanneman and Kerry King. The two other members were Tom Araya on Bass/Vocals and Dave Lombardo on drums. Slayer rose to fame with its 1986 release Reign in Blood, and is credited as one of the “big four” thrash metal bands, along with Metallica, Megadeth, and Anthrax. They were one of the most distinctive, influential, and extreme thrash metal bands of the 1980s.

The band was spotted by Brian Slagel, a former music journalist who had, at the time, recently founded the label Metal Blade Records. He asked them to record an original song, “Aggressive Perfector”, for his upcoming “Metal Massacre III” compilation. The band agreed and the song created underground buzz, which led to Slagel offering the band a recording contract with Metal Blade. Its debut album Show No Mercy, released in December 1983, generated underground popularity for the band, and the group began its first national club tour in 1984 to promote the album. In August 1984, Slayer released a three song EP titled “Haunting the Chapel“. The band embarked on the 1984 Combat Tour, with Venom and Exodus, and released a live album titled” Live Undead” in November.

Released in September 1985, Slayer’s second full-length release Hell Awaits expanded on the darkness of Haunting the Chapel, with hell and Satan as common song subjects. The album was the band’s most progressive offering, featuring longer and more complex song structures. The album was a hit, with fans choosing Slayer for best band, best live band, Hell Awaits as 1985’s best album, and Dave Lombardo as best drummer in the British magazine Metal Forces’ 1985 Readers Poll.

Def Jam’s distributor, Columbia Records, refused to release the album Reign in Blood due to its graphic cover art and themes. For example, “Angel of Death” detailed Holocaust concentration camps and the human experiments conducted by Nazi physician Josef Mengele. The album was distributed by Geffen Records on October 7, 1986. However, due to the controversy, Reign in Blood did not appear on Geffen Records’ release schedule. Although the album received virtually no radio airplay, it became the band’s first to enter the Billboard 200, debuting at number 94, and the band’s first album certified gold in the United States. Reign in Blood was an instant classic, breaking the band through to a wider audience, and was hailed by some as the greatest speed metal album of all time.

Slayer returned to the studio to record their fourth studio album. To contrast the speed of Reign in Blood, the band consciously decided to slow down the tempos, and incorporate more melodic singing. According to Hanneman, “We knew we couldn’t top Reign in Blood, so we had to slow down. We knew whatever we did was gonna be compared to that album, and I remember we actually discussed slowing down. It was weird—we’ve never done that on an album, before or since.1 988’s South of Heaven received mixed responses from both fans and critics, although it was Slayer’s most commercially successful release at the time.

The band has received five Grammy nominations, winning one in 2007 for the song Eyes of the Insane, and one in 2008 for the song “Final Six” (both from 2006’s Christ Illusion).

The music of Slayer has been highly influential, often being cited by many bands as an influence musically, visually, and lyrically. Between 1991 and 2013, the band sold 4.9 million albums in the United States.

On May 2, 2013 Jeff Hanneman, the guitarist and founding member of Slayer, the man who wrote the songs “Raining Blood,”War Ensemble,” “South of Heaven,” “Seasons in the Abyss,” and “Angel of Death,” died of liver failure , in Southern California.